Enjoy the performances below!

END_OF_DOCUMENT_TOKEN_TO_BE_REPLACED

Super Junior’s Heechul is known to be one of the most feminine male KPOP idols out there, earning him the title of prettiest ‘flower boy’ KPOP fans ever laid eyes on. Then along came a boy named Ren (ironically, his name means ‘lotus’ in Japanese) and the rest was history.

A recent poll asked netizens to choose who they thought were Korea’s top flower boys and NU’EST’s Ren was chosen as the #1 flower boy, thanks to his girly looks. Following him are Heechul, 2PM’s Nichkhun, JYJ’s Yoochun, and SHINee’s Taemin.

Not surprising since you know, when Ren was first teased for NU’EST, many fans thought he was a girl. No wonder Aron calls him ‘gongju’ (princess).

On April 9, SHINee released their individual posters for the upcoming SM Entertainment film, “I AM.” Each poster includes a personal message written by the SHINee members, giving a look into the members’ true feelings about themselves.

“My friends told me not to lie when I told them I was having a concert at Madison Square Garden.”

“From the moment we debuted until now, it was like a movie.”

“I wanted to become more dramatic.”

“I AM” will continue to release individual postersm of all SME artists in the coming weeks. A documentary film based on the behind-the-scene and concert footage of “SM Town Live World Tour in Madison Square Garden,” SME’s new film “I AM” will be released in May.

Shared by: Purple of Sona 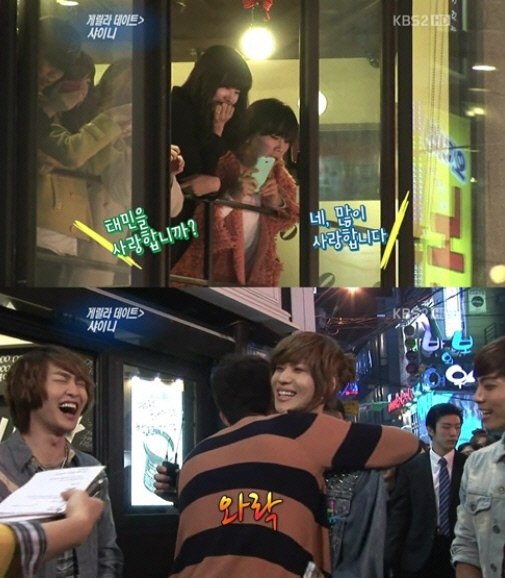 Who said Taemin only has female fans? On the 31st of March episode of KBS “Entertainment Weekly” SHINee were the guests for the guerrilla date and on their guerrilla date, no surprise a huge number of female fans flocked all over SHINee and even looked through windows from upper floors.

However, during the filming, Taemin get’s a hug from a male fan causing quite a stir from SHINee members, Taemin himself and the female fans nearby. When the fan hugged Taemin, you can see Taemin was caught completely off guard and was surprised not to mention the awkward atmosphere.

Netizens commented, “Wow, SHINee has male fans too!”, “Oh how cool, a pretty awesome fan”, “That was interesting”.