The SHINee members opened up on some funny rumors they had heard about themselves through their handwritten resumes. The members wrote out their own resumes for the live open studio broadcast of Mnet’s Wide Entertainment News on March 29.

In the resume, they had to write down basic information about themselves, a self-introduction, interests, strengths, weaknesses and rumors. Their answers for the weirdest rumors they’ve heard and their explanations were especially entertaining. 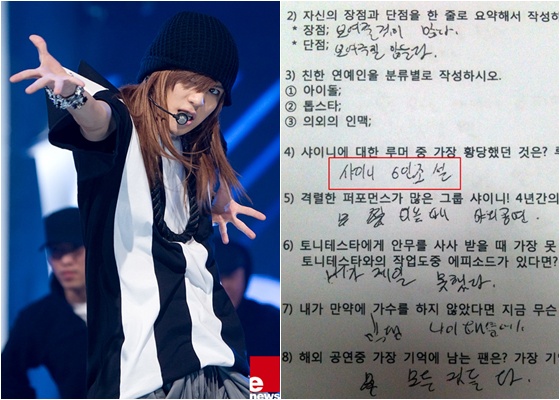 Key and Onew answered, ‘Fasting rumors’ and ‘Don’t you ever eat? Yes, we do eat’.
Minho and Jonghyun answered calmly, ‘Not much’ and ‘There’s no need to explain rumors’, while member Taemin wrote, ‘That SHINee has six members’.

SHINee will be appearing in the open studio located in the first floor of the CJ E&M Center in Seoul. The members will talk about their resumes and answer questions in the Talk Bingo section.

As the open studio is literally open to the public and only has a glass wall separating the stars from the fans, many fans usually crowd around to see their stars when there is a shoot. Many are looking forward to seeing how many fans will gather outside to see SHINee.

SHINee recently made a comeback with its new mini album Sherlock, and after appearing in Wide Entertainment News, it will perform for M Countdown.

One thought on “[News] SHINee Opens Up on Fasting Rumors & Extra Member!”